Peter Gabriel, Johnny Depp, Tom Morello and Nadya from P—y Riot are among the artists taking part in the Voice Project’s “Imprisoned for Art” campaign, which aims to raise awareness and funds to support free expression. Edward Sharpe and the Magnetic Zeros’ Alex Ebert and Ana Tijoux are also involved with the project, with each artist photographed as a mug shot signifying a real person who has been imprisoned for their art. Gabriel holds a slate that reads “Amsara Eritrea, Indefinite Detention,” a reference to writer Dawit Isaak, who was been held in prison in Eritrea since 2001 without trial after being labeled a traitor by the government. Depp’s photo is a tribute to Ukrainian filmmaker Oleg Sentsov, currently imprisoned in Russia on suspicion of plotting terrorist acts for his role in fighting the Crimea annexation.

“Freedom of Expression — it’s easy to take it for granted until it’s gone,” the Voice Project said in a statement. “We speak up for those who speak out, for those imprisoned around the globe for having raised their voice in dissent. We have to stand up for each other, no matter the distance, no matter the borders. You never know when you’ll need the same in return.”

Each photograph will be printed on a T-shirt that will be available for purchase, with proceeds benefitting the organization alongside efforts to free the imprisoned artists. Visit the Voice Project’s Represent page for more information. 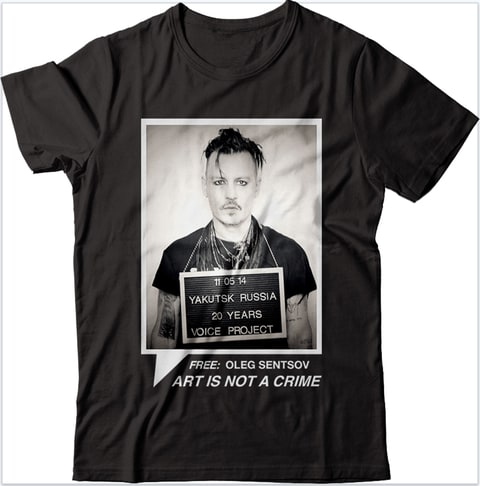 “When I first started traveling around the world [for the Human Rights Now tour in 1988], I was shocked to discover in how many countries there were artists who were in jail, or who had been tortured or killed for doing exactly the same thing that I do — writing and singing songs,” Gabriel said in a statement. “We have to defend and protect those with the courage to speak out.”

“You can’t buy free speech, but you can give it away,” added Morello. “You can also fight like hell for it.”

“Unfortunately, America is about to start looking more like Russia under Putin, it’s already happening, and dissent is going to become a more dangerous business,” Nadya from Pussy Riot, who represents Turkish singer Nûdem Durak for the project, said in a statement. “But that just means dissent is more important than ever. The good news is we can learn from each other, help each other—that we are stronger than we think, both individually and collectively, we have more fight in us that we believe. I know this from being a person in prison, but also from seeing all the people who banded together to get me out.”