Nainoa Thompson, master navigator and architect of the global expedition of Hokule‘a.

Throughout the journey, the crew visited more than 150 ports in 23 countries and territories. “You have to be on your feet, and to be able to feel one wave when it comes through from one foot to another,” master navigator Nainoa Thompson told NPR. “You only know where you are by memorizing where you come from.” Thompson has dedicated his life to honoring the voyaging tradition of his ancestors. The ancient highly-nuanced navigation skills were taught to Thompson by Mau Pialug, a wayfinder from a tiny island in Micronesia.

The awe-inspiring journey around the globe – launching from Hawaii and cutting a trail through the South Pacific, the Indian and Atlantic oceans, the Caribbean, before returning home to the Pacific – was fraught with life-threatening risks.

“But what is more dangerous,” Thompson responded in Costal Living. “The hurricanes, the pirates, the mosquitoes, and the rogue waves? Or … to keep the canoe tied to the dock because you’re afraid to go?” 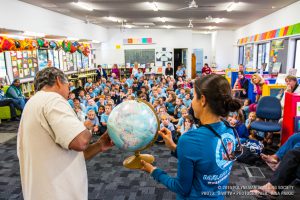 School children learn about the mission of the trip, ecological sustainability, and the Polynesian spirit of voyaging.

Tied to the dock
Along these same lines, the greatest spiritual advice I ever received came from my mom, Joann Beard. Most memorably she told me during a time of indecision: “God cannot steer a boat that is tied to a dock.” We were created to explore.

Two decades ago, I heard a sermon from retired Bishop Al Gwinn when he was pastor of Centenary United Methodist Church in Lexington, Kentucky. What I never forgot was his message about one’s place in this enormous and chaotic universe – and how we are never out of God’s sight or reach.

While the Lord may work in mysterious ways, I would much rather sail with Nainoa Thompson’s Polynesian crew than with Bishop Gwinn’s friends. During those hours in the Gulf Stream, I think even Bishop Gwinn would have agreed. The spirit of exploration launches you into the deep. It is the ancient skill of wayfinding, however, that brings you back home.

Steve Beard is the creator of Thunderstruck Media. For more info, check out the beautiful book about the adventure called Malama Honua: Hokule’a – A Voyage of Hope (Patagonia) via Amazon.