By Pauline Curtet, This is Finland

Finnish heavy metal pioneers such as Nightwish, Apocalyptica and HIM, known worldwide, proved to be inspiring. Since 2006, a priest has regularly organised metal mass – mass for metal music fans – in churches around Finland.

“We didn’t change the lyrics of the hymns,” says Haka Kekäläinen, the 50-year-old priest presiding over the mass. “We only changed the musical arrangements to fit the rhythms of metal music.” He looks exactly like a metalhead: dark hair down to his shoulders, a long beard and – when he isn’t wearing his priestly robes – a leather coat.

This pastor, who belongs to the Evangelical Lutheran Church of Finland, succeeds in combining his passion for God and his taste for metal music by holding “metal masses” at regular intervals.

People of all ages appear in the audience at the Turku church, but surprisingly few are metalheads. “At one of our masses, I noticed that the youngest spectator was two months old,” Kekäläinen says. “The oldest one was 87. We attract a lot of people who are not believers. We show them that it is possible to have fun in church.”

Adventure far from over 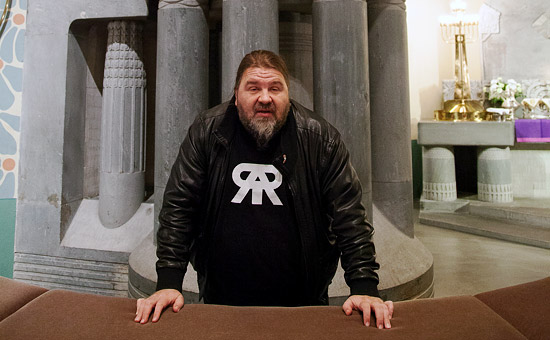 The man behind metal mass: Pastor Haka Kekäläinen combines his love of God with his enthusiasm for heavy metal.Photo: Tim Bird

Mika Mäkinen, a 30-something man with his blond hair in a ponytail, admits he only goes to the metal mass. “This is my ninth time,” he says.

Another man and his spouse, both in their 50s, attend every metal mass held in Turku. “We never listen to metal music. But here, we like the unique and fantastic atmosphere,” they confide.

The first metal mass took place in 2006, in Helsinki’s Temppeliaukio Church. About 1,300 people flocked to the event. “They couldn’t all fit in the church,” remembers Kekäläinen. Since then, the band, whose members are not all believers, has played in 95 metal masses throughout Finland and recorded an album. Its 8,000 copies sold out quickly.